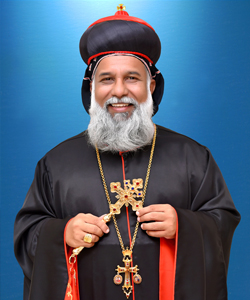 His Beatitude Moran Mor Baselios Cleemis, Major Archbishop-Catholicos of the Malankara Catholic Church and the Major Archbishop of Trivandrum was born on 15 June 1959 as the son of the late Mathew and Annamma Thottumkal at Mukkoor, Mallappally in the civil district of Pathanamthitta, Kerala, India and he was given the name Isaac. He hails from the traditional Pakalomattom-Powathikunnel family. He completed his primary education in St. Mary\\\'s UP School, Kunnanthanam and secondary education in St. Mary\\\'s High School, Annikad. Responding to the urge of God within him to surrender his life to the service of his Church and of the larger human community he joined the Infant Jesus Minor Seminary of the Eparchy of Tiruvalla in June, 1976. Bro. Isaac completed his Pre-degree studies in St. Berchman\\\'s College, Changanacherry. Then he was sent to St. Joseph\\\'s Pontifical Seminary, Aluva for the philosophical studies.

In 1978, the Eparchy of Sultan Bathery was erected bifurcating the Eparchy of Tiruvalla. Bro. Isaac boldly decided to embrace the challenges of a mission diocese and thus opted for the new Eparchy of Sultan Bathery. After completing his philosophical studies and a year of regency, he was sent to the Papal Seminary, Pune for his theological studies. On 22 March 1986, he was ordained a deacon by His Excellency the Most Rev. Valerian D\\\'Souza, the Bishop of Pune. In March 1986 he graduated in theology from the Pontifical Atheneum, Pune. On 11 June 1986, His Excellency the Most Rev. Dr. Cyril Mar Baselios ordained him a priest for the Eparchy of Sultan Bathery. Fr. Isaac Thottunkal was then sent to Dharmaram College, Bangalore to do Masters in Theology. While doing his Masters, he served as the Vicar of the Malankara Catholic Faithful in Bangalore and contributed much to the founding of the flourishing Malankara Catholic Missions in Bangalore.

Having successfully completed his Masters in Theology in 1988, Fr. Isaac Thottunkal returned to Sultan Bathery and served as the Rector of the St. Thomas Minor Seminary and the Parish Priest of the St. Thomas Cathedral in Sultan Bathery. Then he was sent to Rome to do Doctorate in Theology. In 1997, he completed his Doctorate in Ecumenical Theology from the University of St. Thomas Aquinas, Rome.

Having returned to his home diocese, he served as the Spiritual Father of the Minor Seminary, the Chancellor of the Eparchy and as the Proto-Syncellus of the Eparchy. He is the author of three books, namely, Emerging Trends in Malankara Catholic Theology: Vision and Contributions of Cyril Mar Baselios, Sabhackum Samoohathinumayi (Malayalam) andSubisheshadeepthi (Malayalam).Msgr. Isaac Thottunkal was appointed Auxiliary Bishop of Trivandrum and Apostolic Visitator to North America and Europe on 18 June 2001 by Pope John Paul II. He was ordained a Remban on 2 August 2001 at St. Thomas Cathedral, Sultan Bathery by Most Rev. Dr. Cyril Mar Baselios, Metropolitan Archbishop of Trivandrum. He was ordained a Bishop on 15 August 2001 at Thirumoolapuram, Tiruvalla by His Grace the Most Rev. Dr. Cyril Mar Baselios. He assumed the name Isaac Mar Cleemis.He served as the Apostolic Visitator to the Malankara Catholic faithful in North America and Europe for two years and during this tenure, he took the initative to strengthen the existing Malankara Catholic Missions in North America and started a new Mission at Rockland County, New York. The Mar Ivanios Malankara Catholic Centre at New Hyde Park, New York is the visible fruit of the vision and the toil of Mar Cleemis who could win the wholehearted cooperation of all the Malankara Catholics in North America in realizing this project. In America, he served as the Patron of the Indian Christian Forum of North America and of the St. Thomas Ecumenical Federation of India in North America.

On 11 September 2003 His Excellency Isaac Mar Cleemis was appointed Bishop of the Eparchy of Tiruvalla and he was installed in office on 2 October 2003 at St. Johns\\\' Cathedral, Tiruvalla. In February 2006, he was elected the Vice President of the Catholic Bishops\\\' Conference of India.

By the providence of God, His Beatitude Moran Mor Baselios Cleemis Catholicos ascended the steps of eccleciastical dignity in an unfathomable speed. After his priestly ordination in 1986, he became a bishop in 2001. Within the next 11 years he was appointed Cardinal on the 24 October, 2012, at the age of 53 having the honour of being the youngest among the Cardinals. His appointment as a Cardinal is the crowning point of Syro-Malankara Catholic Major Archiepiscopal Church and his elevation is a blessing to India as a whole. The consistory took place on the 24th of November 2012 in the presence of all the bishops of the Syro-Malankara Catholic Church and the Most Rev. Soosai Pakyam, the Archbishop of Trivandrum of the Latin rite and the bishops of the other Christian denominations such as Jacobite Church, Marthomite Church, and Church of South India creating an ecumenical atmosphere. The honourable Mayor of the city of Trivandrum and esteemed representatives of the Central and of Kerala State Government and leaders of Hindu and Muslim religions and the Malankara faithful in the world over were present on this auspicious occasion.

His Holiness Benedict XVI during the liturgical celebration adorned all the six newly created cardinals with insignia. His eminence Baselios Cardinal Cleemis has to wear a cap made according to the Malankara tradition. On the 25th morning the Cardinals concelebrated with the Pope in St. Peters, and in the evening Baselios Cardinal Cleemis offered a Pontifical High Mass in the Baselica of St. Paul and St. John with the bishops of other rites, priests, sisters and a large number of faithful. There was a general audience with the Pope on the 26th and everybody was happy to meet the Pope and greeted by him.

The Syro-Malankara Catholic Church observed a day of thanksgiving on the 1st of December 2012 in Trivandrum, the head-quarters of the Church. Archbishop Salvatore Penaccio, the Apostolic Nuncio to India, Oswald Cardinal Gracias, the president of the Catholic Bishop\\\'s Conference of India, and hundreds of priestly dignitaries concelebrated and participated in the Holy Mass which was followed by a congratulatory meeting. The assembly was intended to express the exhilaration on the evelation of His Beatitude Moran Mor Baselios Cardinal Cleemis Catholicos, the Father and Head of the Syro-Malankara Catholic Church as a Cardinal, the prince of the Universal Church and a close associate of the Pope. In his reply he expressed that his staus as a Crdinal is a great responsibility and not an adornment.

In a special ceremony on the 19th of May 2013 Baselios Cardinal Cleemis took charge of his titular parish, San Gregorio VII, in Rome. The Cardinal, acompanied by His Eminence Leonardo Cardinal Sandri, the Prefect for the Congregation for the Eastern Churches, reached the main gate of the parish, and Fr. Padre Paulo solemnly received him. He kissed the Crucifix at the door and entered the Church in a procession and blessed the congregation sprinkling holy water on them. The President of the Pastoral Council of San Gregorio VII officially welcomed His Eminence. The Cardinal then handed over the letter of appointment issued to him by His Holiness Pope Francis to the Rector of the Basalica and Msgr. Vincent Perony read the letter to the public. Leonardo Cardinal Sandri, after the Scripture reading delivered the Homily. Prayer of petition was offered in Latin and Malankara Rite both in Italian and Malayalam languages. His Eminence expressed gratitude to the Holy Father, Rt. Rev. Monsignori and all those gathered in the Church. After the Final Blessing, His Eminence Baselios Cardinal Cleemis and other responsible personals signed the official register. Besides, Most Rev. Joshua Mar Ignatios, the bishop of Mavelikara, Rt. Rev. Monsignori, Rectors and other priests and a large number of faithful were present. This ceremony expesses and ensures the relation between the Popes as the successors of St. Peter and the Cardinals.

The Syro-Malankara Catholic Church was privileged to have the visitation of a few eminent ecclesiastical personalities in recent years. Among them His Eminence Leonardo Cardinal Sandri, the prefect of the Congregations for the Oriental Churches, is to be mentioned first. He had visited the Church in November 9-11, 2008 to declare the St. Mary Queen of Peace Cathedral, Palayam as the Baselica, and he had also visited the sacred tomb of Archbishop Mar Ivanios, the Servant of God, in Pattom. The Syro-Malankara Catholic Church was privileged to enjoy his presence and participation on a second time in the month of January, 2012 on the auspicious occasion of the blessing of the Synodal Hall dedicated to the Blessed John Paul II. He was accorded a grand welcome on these occasions by His Beatitude Moran Mor Baselios Cleemis Catholicos, the Father and Head of the Church. His Eminence Cardinal Sandri participated in the special Episcopal synodu held on the 15th of January which was presided over by His Beatitude. The Synodu was attended by all the bishops of the Syro-Malankara Catholic Church.

His Beatitude Moran Mor Ignace Yousef III Younan, the Patriarch of the Syrian Catholic Church of Antioch, visited the Major Archdiocese of Trivandrum on two occasions, 20-22 September, 2009 and 23-24 January, 2012. On his visit in January, 2012 he was accompanied by a few Archbishops, bishops and a group of lay faithful. They were all cordially welcomed by His beatitude Baselios Cleemis Catholicos.

The Syro-Malankara Catholic Church is exceedingly privileged and extremely happy to have His Beatitude Beshara Butrose Al Rai, the 77th Patriarch of the Melkte Syrian Catholic Church on the propitious occasion of its 82nd Re-Union anniversary celebrations and the consecration of the newly constructed Cathedral of the diocese of Pathanamthitta held from 17-21 September, 2012. The Patriarch is based in Lebenon and is the Father and Head of 35 lakhs of Melkite Catholics spread the world over. And His Beatitude Moran Mor Baselios Cleemis Catholicos had an occasion to visit Lebenon from 13-17 September, 2012 and to meet the Patriarch and also to meet with His Holiness Pope Benedict XVI there. On his arrival in Trivandrum on the 19th of September, His Beatitude Moran Mor Baselios Cleemis Catholicos received him in the airport along with the state officials. On the 20th of September he participated in the concecration ceremony of the Cathedral and delivered a message of blessing. On the 21st he was the chief gust in the Re-Union Movement celebrations. It is to be noted with joy that His Beatitude Beshara Butros Al Rai was created a Cardinal on November 24, 2012 along with His Beatitude Baselios Cardinal Cleemis.

His eminence Antonio Louis Cardinal Tagle, the Archbishop of Manila, Philipines, visited the Syro-Malankara Catholic Church from 14 to 16 July, 2013 in connection with the 60th anniversary of the demise of Archbishop Mar Ivanios, the Servant of God. On the 15th of July he was a concelebrant in the Mass offered for Mar Ivanios. He was the gust of honour and the homilist on that occasion. He was given a cordial, warm and grandiose reception on the 15th morning. He met all the bishops of the Syro-Malankara Catholic Church and visited St. John\\\'s Malankara Medical Village at Pireppancode and Mar Ivanios Vidya Nagar, Nalanchira. He addressed the members the Jesus Youth of Mar Baselios College of Engineering and Technology, Trivandrum and the Seminarians of St. Mary\\\'s Malankara Major Seminary, Trivandrum. The Archdiocese of Manila has 29 lakhs of faithful and he took charge of the Archdiocese in October 2011. He is also a member of the Intenational Theological Commission, Rome. He is created Cardinal along with His Beatitude Baselios Cardinal Cleemis on the 24th of November, 2012.